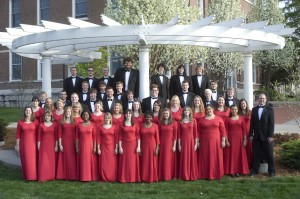 The Monmouth College Chorale, under the direction of Professor Tim Pahel, is a highly selective mixed ensemble which performs regularly on and off campus.  The Chorale serves as the centerpiece for the annual “Christmas at Monmouth” concerts and maintains an active and demanding rehearsal and performance schedule.  The group serves as an ambassador to alumni, prospective students, and the general public.  The Chorale engages students from nearly every major offered at Monmouth College, giving students well-rounded musical experiences with high expectations for performance and competency.

The Chorale has toured extensively both nationally, visiting nearly half the states in the country, and internationally, including a recent trip to Scotland and a tour of Spain in spring, 2012.  In 2013 the group performed in Carnegie Hall in New York City.

The Chorale frequently collaborates with other campus ensembles including the Monmouth Chamber Orchestra and the Monmouth Concert Choir for performances of masterworks such as Mozart’s Requiem and Vivaldi’s Gloria.  In spring, 2013 the Chorale combined with the Galesburg Community Chorus, the Knox College Choir, and a professional orchestra for a performance of Haydn’s Lord Nelson Mass.

The Chorale has commissioned works by living composers, including Donna Gartman Schultz in 2007, and has an upcoming joint commission with Knox College of a new work by Finnish composer Jaakko Mantyjarvi for a spring 2014 premiere which will include a guest residency by the composer.

There are no events to show.